Don't Try This At Home

For various reasons, the school my daughter attends this year was unable to organize things so that she could be in the math class that followed from the math class she had last year. In fact, the class she was put in this term is working on math that she did 3 years ago.

Fortunately, the teacher of that class does not make her (re)do that "old" math with the rest of the class. During class, my daughter sits by herself and works on her own.

So what does she do in math class? She does math problems that I assign her, based on the math that I teach her in the evenings at home, using an online textbook. That is the temporary solution we worked out with her school: I will teach her math at home.

Why me? Why not her dad?

Because this is what dad-as-evening-math-tutor would be like, we feared: 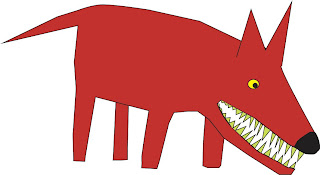 In contrast, this is what mom-as-evening-math-tutor is like, in theory:

(though perhaps a bit more alert, most evenings).

So, I am the designated parental math tutor, and here is what I have learned so far:

- The things I hate about grading still apply. Grading doesn't become more fun just because you are teaching your own beloved child. That is, just because I am teaching my daughter, who is the light of my life and a truly wonderful human being, doesn't make it any less annoying when she turns in a messy page of homework covered with incomplete erasures and crossed out things and a mystifying sequence of answers in no particular order (and no helpful labels).

- For me, Science is easier to teach than Math. In Science, I know how to explain things. In math, some things can be explained by examples -- perhaps many examples of different sorts -- but some things just are. That is showing my limitations as a math teacher, something I also encounter when I teach a quantitative Science course: I explain why I am doing the math in terms of the Science, but I don't typically explain the math itself. I just do it.

- There are a lot more (imaginary) people in (this) Math textbook than in (my) Science textbooks and I don't like some of them. Most chapters of the math textbook we are using describe an impressive array of enterprising teenagers figuring things out involving math. That's nice -- I like the textbook quite a lot, actually -- but I wonder how much the involvement of people -- even imaginary ones -- affects math-learning. That is, are we each influenced by whether we relate to the imaginary people and their imaginary problems? For example, I am not so interested in Josh's questions about the operation of his remote-controlled car or Delores' attempt to figure out which phone plan to get, but I am intrigued by some of the scientific and sociological datasets and the various things we can learn by analyzing them. And, although I do appreciate the real-world examples, sometimes I get tired of all these perky teens and just want to play with the equations.

- When you teach math at home, in the evening, to your child, you can have ice cream during class.

Anyway, despite my shortcomings as a math tutor, we seem to be doing OK with our math-with-mom-at-home arrangement. Even so, once the schedule is fixed so that she can join the right math class at school again, I will happily hand her (and the grading) over to a real math teacher.