Recently, as I was walking across a rather pretty campus, I noticed a more extreme example of what occurs on most campuses:

the mismatch between where the landscape designers (and landscape maintenance crews) want people to walk, and where people want to (and do) walk.

Surely most campuses have little dirt footpaths that cut off right angled or curved *official walkways*. In some cases, these footpaths are allowed to exist, and in some cases these are eventually promoted to official walkways and are paved/landscaped, in recognition that people are going to walk that way.

In other cases, however, there seems to be a never-ending battle between those who want to take short cuts and those who do not want those short cuts to be taken. Short cuts are fenced off, reseeded or re-whatevered, and pedestrians are forced to follow the approved pathways. The grass (or whatever) looks nicer that way. Perhaps if some short cuts are allowed, new ones crop up until you might as well pave the whole campus. And who wants that?

I don't think the issue of short cuts is about laziness, rebellion against authority, or even a lack of respect for turf. I think it is about getting from Point A to Point B, in some cases in a rush between classes or meetings.

In my recent across-campus walk (not on my own campus), I was amazed at how pedestrian unfriendly the campus was, despite the abundance of green space and landscaping. It looked like an appealing place to stroll, as long as you strolled only where the original campus planners wanted you to go.

Clearly, many people do want to go from X to Z, and a distinct (unofficial) path has developed over time. It was also clear that this path is not in favor with those responsible for maintaining the campus landscape. The path is in the process of being erased (and not for the first time), and the X-Z people herded to an official-but-circuitous route.

I am sure it is a nightmare to maintain a campus landscape so that the non-paved parts remain in good shape despite "off-road" pedestrians, Frisbee players, jugglers, and bicyclists, not to mention extreme climate events, crazed rodents and so on. But still: It should be possible to have a pedestrian-friendly pathway system that recognizes the need to get from A to B and from A to C quickly.

Can we classify campuses in terms of the goodness of fit between where people want to walk and where they are "supposed" to walk? Do we need a ratio, preferably a dimensionless number with a cool name? Can we call it the Versailles Number?

I lack the time to develop this idea further right now, but welcome comments and suggestions. 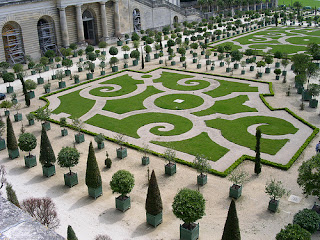 Email ThisBlogThis!Share to TwitterShare to FacebookShare to Pinterest
Labels: campus